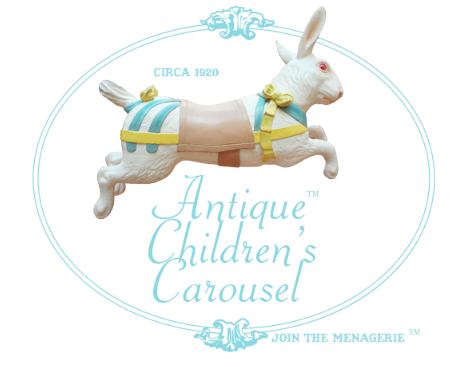 What did Carlos think as he ran his fingers over the carousel horses that day in Havana when he went to the park with his grandfather?

He was thinking about the carver's skill and it thrilled him to feel the finished piece.

When did Carlos begin carving and what sort of projects did he explore with his talent?

When he was a little boy, he would fake an illness to stay home from school and sculpt little figures out of clay.

What did you think, Judy, when Carlos brought home his first carousel horse from the antique store?

His enthusiasm was so contagious I caught it. He traded our antique buckboard for his first horse. My father thought he was not making a sound decision.

When did the two of you decide that carousel art was to become a passionate endeavor for you?

In the 1970's my mother gave Carlos a book, "Treasury of American Design" by Clarence P. Hornung.  There were two books with photos and history of carousels. If he had a spare moment, that book was in his hands.

How many carved animals have you restored over the years?

We don't really know how many horses we have restored but I would guess it is well over one hundred.

Tell us a few good stories about your carousel journey.

One day when I was running the carousel  I noticed a little girl constantly looking back. When she got off the carousel, she said "Daddy did you see all those horses chasing me?" Another time this elderly gentleman was watching while his granddaughter was riding. He said to me "boy am I in trouble, I promised my wife I would not spend any more money on the ponies". His granddaughter rode at least five times. Better to spend the money at the carousel than the track in my opinion. The experience that touched me most was a man who was always showing up at the carousel with different children. One day our operator asked him how many children he had. He said they were not his. They were under privileged children whom he wanted to have the experience of a magical carousel ride. He had been a severely abused child.  Someone used to take him to ride a carousel and this was the only pleasant memory he had growing up. Today he is a motivational speaker.  After Burt Reynolds did "Sharkys Machine" he loved the polished carousel horse we sold to an antique store in Atlanta, that after the movie, Burt bought it and took it home with him. We did not see the movie because someone told us it was very bloody.

What is endearing to you about the ANTIQUE CHILDREN'S CAROUSEL in the CoolSprings Galleria?

The fact that the carousel has so many people who love it. We love our employees there. They are wonderful people. Franklin is one of the most beautiful towns and the people have that famous "Southern Hospitality". Also the mall office people are the best. They are easy to talk to and very accommodating.

What do you believe is the future of the carousel industry in America and across the world?

Our belief is that carousels will never go out of style. When you see the older people riding, their faces seem to be reliving their childhood. The faces of the children are so animated with their childhood imagination running wild. Carousels are sweet, innocent, fun and timeless machines of joy. May they last forever.